‘Don’t You Know Me? A Steve Goodman Songbook’
Elaine St. George (self-released)
4 stars out of 5

Without question, singer/songwriter Steve Goodman left us too soon. Goodman emerged on the folk scene in the 1970s and penned a handful of enduring singles before eventually succumbing to cancer in 1984 at the age of 36. Acclaimed jazz singer Elaine St. George is paying tribute to Goodman’s work — hopefully introducing his music to an entirely new generation — with “Don’t You Know Me? A Steve Goodman Songbook.” 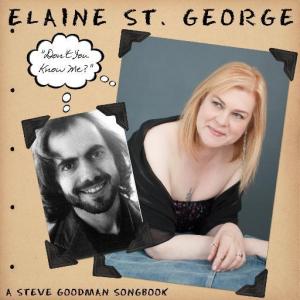 “I sing Steve’s music because it’s beautiful. It deserves to be heard,” St. George explains. And I sing Steve’s music because his spirit feeds me. It’s the spirit of never giving up, of being dealt a tough hand and turning it into something beautiful and lasting, something that can move people to laughter and tears. He inspires me as an artist every day. I’m honored to have the chance to bring his music to life again.”

The 15-track, 53-minute set features 13 songs penned by Goodman. The other two songs are covers of John Prine (“Souvenirs”) and Michael Smith (“The Dutchman”), tunes that Goodman himself covered back in the day. Goodman’s most famous composition is “City of New Orleans,” which was a hit for Arlo Guthrie, and St. George gives a stirring rendition here.

Additional standouts include St. George’s readings of “Between the Lines,” “The I Don’t Know Where I’m Going (But I’m Going Nowhere in a Hurry) Blues,” “Chicken Cordon Bleus,” “I Just Keep Falling in Love,” “Old Smoothies” and “Would You Like to Dance?” This is a fitting tribute to one of the great songwriters of his generation. (Jeffrey Sisk)